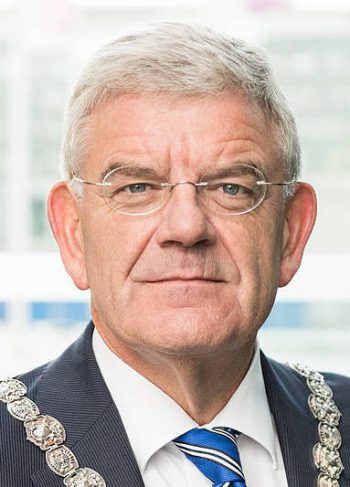 Mayor of The Hague

“As President of the VNG I have been active as delegate to the global umbrella organisation United Cities and Local Governments for a long time. In my work as VNG delegate, als UCLG Policy Councillor and since 2019 as UCLG Co-President, I am motivated to advance the peace agenda of this global organisation that collectively represents over 70% of the world population. This connects strongly with my position as Mayor of the Hague, international city of peace and justice. Having first-hand experienced the award ceremonies of the UCLG Peace Prize and listened to the inspiring stories of the finalists, I encourage this initiative and am committed to make it grow.”

Jan van Zanen is the Mayor of The Hague, the city of peace and justice, since 1 July 2020. As President of the Association of Netherlands Municipalities (VNG), Mayor van Zanen has taken up an active role as delegate to United Cities and Local Government (UCLG), the world’s largest network of local and regional authorities. He is the Co-Chair of the UCLG Policy Council on Opportunities for All, Culture, and City Diplomacy. Elected at the organisation’s World Congress in 2019, Mayor van Zanen holds the position of Co-President of UCLG.