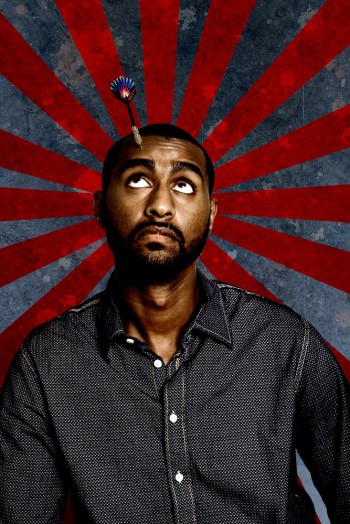 Khalid Albaih is a Sudanese independent political cartoonist living in Doha, Qatar. His stark, politically-charged images rose to prominence during the early stages of the Arab Spring protests in 2011. Posting his work in the public domain through social media, Albaih quickly became an artist of the revolution. His work was shared online—across Arabia and around the world. Albaih’s cartoons were seen online and made into stencils—to be reproduced on walls in Beirut, Cairo, Yemen, and across the Middle East by anonymous graffiti artists. Photographs of these stencils were shared extensively, spreading Albaih’s work across the web in an emerging free space of protest.

Alongside worldwide attention, Albaih has staged major exhibitions of his work, 2013 at the Edge of Arabia in London. In November 2014, McGill University hosted “Khartoon! By Khalid Albaih”, a series of exhibitions and events honoring the artist’s work, coupled with multiple interviews for radio, television, and print. Later in the month, Mr. Albaih was a featured presenter the “Arab Future and the Role of Europe” conference at the Peace Palace in The Hague. The event was hosted by Chief International Correspondent for the BBC Lyse Doucet. Albaih presented his work to eminent Algerian-born diplomat Lakhdar Brahimi, former UN special envoy to Syria, who was being honoured at the conference.

Albaih’s work is currently used by revolutionary groups in his native Sudan and by political activists in Yemen, Lebanon, Tunisia, Syria, and Algeria. Albaih has been profiled by the BBC, Al Jazeera, and the New York Times. He has published his work extensively around the world, in the Atlantic, Global Voices, and Frankfurter Allgemeine Zeitung, to name only a few. He was recently interviewed by Anna Maria Tremonti on CBC national radio. Alongside worldwide attention and major publications, Albaih has staged major exhibitions of his work, most recently in Mcgill university Montreal, Edge of Arabia London, and The Arab American National Museum in Detroit, USA . Following the January terror attacks in Paris, Albaih was named as one of 5 cartoonists fighting for freedom of speech daily and was interviewed by CNN, BBC, ABC, Al Jazeera, and Huffington Post within a twenty-four hour period. Albaih currently works at Qatar Museum Authority (QMA) where he is Head of Installation and Design for Public Art Program. Khalid Albaih is a true new social media artist, constantly publishing new works under the name Khartoon! (a play on Khartoum, the Sudanese capital) for all to consider, use, and share.