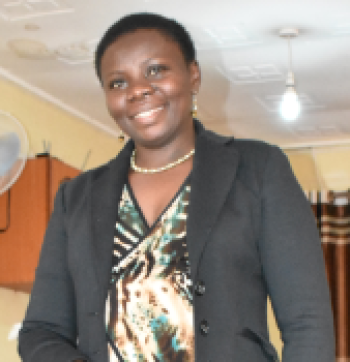 “As a conflict-affected person, I can feel the pain of other victims and survivors. There is a need to address that pain since all human beings deserve an equal treatment.”

Grace Acan is a social worker by profession and an advocate for the rights of survivors of conflict-related sexual violence (CRSV). Not Yet Sunset, the book written by Grace and published in 2018, tells the story of her abduction and life inside the LRA. Grace is the co-founder of the Women’s Advocacy Network Uganda (WAN), which brings together more than 900 war-affected women and men to advocate for justice, recognition, and accountability for sexual and gender-based violence.

Grace is currently working with Refugee Law Project and she is also a Board member of the Global Survivors Fund, whose mission is to enhance access to reparations for survivors of conflict-related sexual violence.

Furthermore, Grace is one of the founding members of SEMA – the Global Network of Victims and Survivors to End Wartime Sexual Violence. SEMA means “Speak Out” in Swahili and today it has members from 21 countries around the world. SEMA is rooted in survivor-led, activist networks at the local level, representing thousands of survivors of wartime sexual violence. Through SEMA, Grace is part of a selected group of survivors who participates in quarterly sessions with UN female peacekeepers, as part of the Female Military Officers’ Course. Since its creation, Grace has been a source of support, strength and inspiration to fellow members of SEMA, and she has spoken publicly at numerous international conferences and meetings.