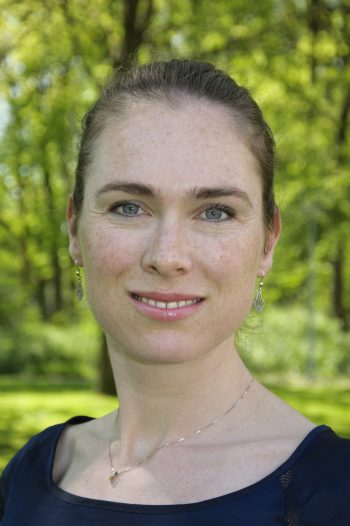 Cognitive psychologist Mariska Kret is a researcher at the Cognitive Psychology department of the Leiden University. She explores how we express our emotions through non-verbal “channels”, how they are picked up and what impact they have on the development of trust, cooperation and competition. She looks for changes in the body and the brain during different emotions. She does not only do that with people. Chimpanzees and bonobos are also included.

“Bonobos are loveable, pieceful beings. Let’s overcome our arrogance and follow their example. We can definitely learn from the bonobo to become better versions of ourselves.”

Obtained a MSc degree in Cognitive Psychology (2006) and Clinical Psychology (2007) from Leiden University. In 2011 she obtained a PhD from Tilburg University in neuropsychology. Her PhD focused on the perception of emotional body language and innovated the field of affective neuroscience that was characterized by an almost exclusive focus on facial expressions. After her PhD she worked at Kyoto University, studying chimpanzee’s emotional behavior. During her later postdoctoral appointment at the University of Amsterdam her research on emotion perception extended to social decision making and became more and more interdisciplinary, connecting sub disciplines within the field of psychology with primatology, behavioral biology and psychiatry and combining various research methods, ranging from psychophysiological measures to hormonal administration and observation studies. She is currently the director of the CoPAN lab at Leiden University’s Cognitive Psychology Unit.